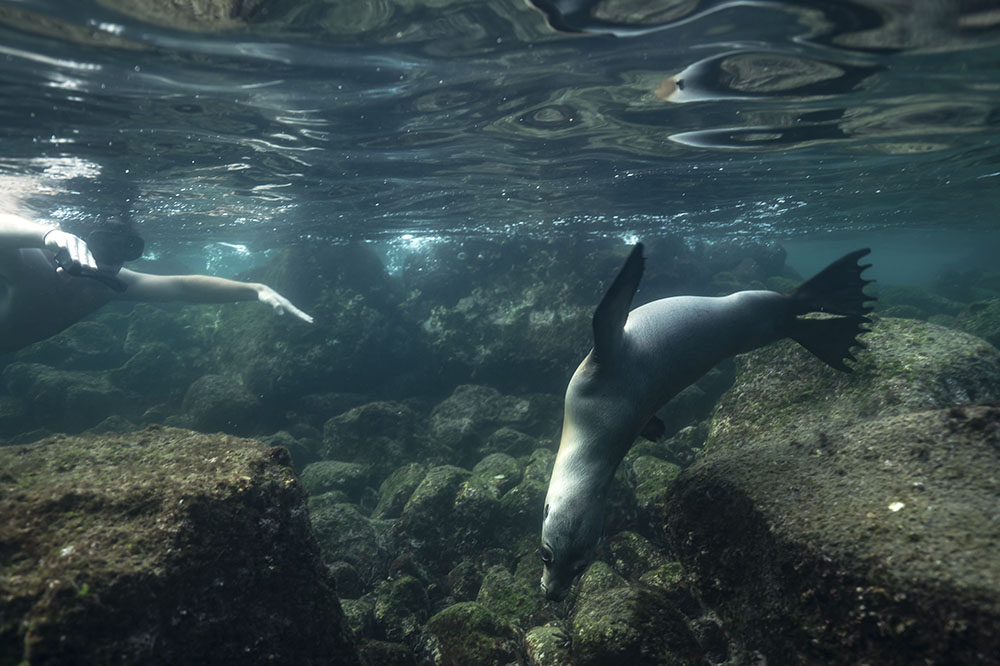 You will arrive at San Cristobal Island in the morning. After passing through immigration and baggage claim, you will be met by a  Calipso staff member and transferred to the yacht. You will be shown to your cabin where you will have some time to settle in before lunch and a welcome briefing

Witch Hill: Located on the northern coast, this eroded hill and its surroundings present one of the most picturesque beaches in the Galapagos with its white powdery sand and the abundance of animals. Wildlife includes sea turtles, rays, and various types of booby birds.
The clear water provides an excellent opportunity for enjoying swimming and snorkeling.

You will head to Bartholomew Island where the famous Pinnacle Rock is found. Bartolome consists of an extinct volcano with a variety of red, orange, black and even green volcanic formations. We will take a trail of stairs to the summit of the volcano (about 30 or 40 minutes) where you will enjoy one of the best views of the islands! You will also visit a small, beautiful beach surrounded by the only vegetation found on this barren island. The beach is perfect for snorkeling where you may even see and swim with Galapagos penguins.

Chinese Hat Islet:  This small islet is located near the southeast coast of Santiago Island. Its name comes from the distinct shape of the islet’s summit. This small islet is a great location to view many geological formations such as lava tunnels and lava flows. Some of the lava flows were formed underwater and subsequently raised above sea level. The presence of coral heads on the lava flow indicates this phenomenon.

Espinoza Point: Crossing the Bolivar Channel that divides Isabela and Fernandina Islands, you will land at Espinoza Point, and after walking past a colony of marine iguanas and a group of sea lions, you will reach the island’s highlight: the flightless cormorant nesting site. This area also provides a great opportunity to see the Galapagos hawk.

In the afternoon, you will visit Tagus Cove on Isabela Island which is located across from Fernandina Island, near the Bolivar Channel dividing the two islands. This spot has been frequented by ships since the 1800s, using the area as an anchorage site. Trails winding by Lake Darwin up to a ridge display wonderful views

Urbina Bay is located at the base of Alcedo Volcano on the west coast between Tagus Cove and Elizabeth Bay. This area experienced a major uplift in 1954 causing the land to rise over 16 feet. The coast expanded half a mile out leaving marine life stranded on the new shore. This area is also a great place for snorkeling.

Moreno Point is located southwest of Elizabeth Bay. Here a dry landing onto what was once owing lava is possible. The lava has left craters in its wake which formed crystal tide pools. By looking into the pools, you can peer into another world as the marine life drifts by your window. In the brackish pools of this area, you may see pink flamingos, white-cheeked pintails, and common gallinules. If you look carefully into the pools, you may see white-tip reef sharks and some sea turtles.

In North Seymour you may see Galapagos sea lions, blue-footed boobies, and magnificent frigate birds which are abundant on this island. North Seymour was formed by a series of submarine lava flows containing layers of sediment that were uplifted by tectonic activity. The island is characterized by its arid vegetation zone.

This small island with steep cliffs was formed by rising lava and is now covered by Opuntia cacti. It is also home to one of the largest sea lion colonies as well as colorful yellow and red land iguanas. The most characteristic plant is the Sesuvium. During the rainy season its color is a greenish to yellowish tone and in the dry season (end of June through January) a bright red.

Post Office Bay: You will land on a beach and head to a spot where 18th century whalers placed a wooden barrel used as an unofficial mail  box. The custom continues to this day with Galapagos visitors. So, don’t forget your postcards, and don’t be surprised if the post card arrives to its destination before you even get home!

Baroness Viewing Point is a fantastic place to absorb the environment of the Galapagos. Once inhabited by an indulgent baroness and her three lovers, the history of this island is intriguing. The legends about this baroness are associated with a fascinating murder mystery. There are easy trails in this area for exploring the flora and fauna of Floreana.

Cormorant Point hosts a large flamingo lagoon where other birds such as common stilts and white-cheeked pintails can also be seen. The beaches on this island are distinct: The Green Beach is named so due to its green color, which comes from a high percentage of olivine crystals in the sand, and the Four Sand Beach is composed of white coral.

Santa Fe Island (Barrington) is home to the small picturesque bay and anchorage on the island’s northeast coast. The bay has two visitor trails: one leading to a scenic viewpoint atop a cliff, and the other spanning from a small beach to a tall prickly pear cactus forest.

You will visit “Fausto Llerena” Giant Tortoises Creeding Center in Puerto Ayora, Santa Cruz Island, where giant tortoises are bred in captivity; this is home to tortoises ranging from 3-inches (new hatchlings) to 4-feet long adults. Subspecies of the giant tortoises interact with one another, and many of the older tortoises are accustomed to humans stretching out their heads for a photo opportunity. The babies are kept until they are about four years-old and strong enough to survive on their own.

This site is part of an environment project. The tour of this center will explore the natural history of the islands including human interaction and conservation efforts. The Museum of Natural History explains the volcanic origin of the archipelago, ocean currents,  climate, and the arrival of endemic species. The Human History exhibit chronologically describes significant events such as discovery and colonization of the islands.

After this final visit, you will be transferred to the San Cristobal airport in time for your flight back to the mainland.